JULIE and the LIGHT

'An 11-year-old street girl follows a mysterious White Light across the country to save her mother from a mystical martial arts commune that may only exist in her mind.' 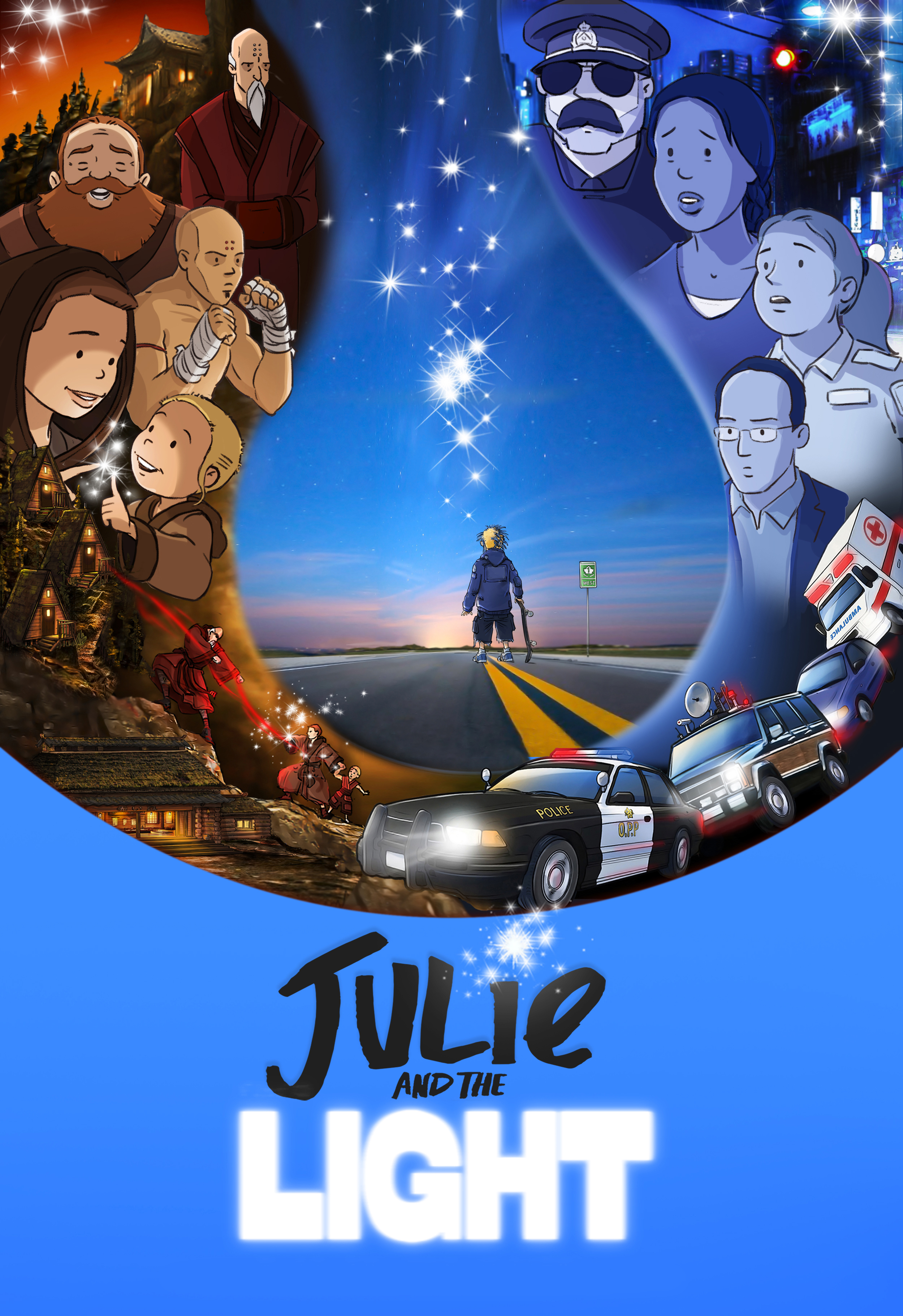 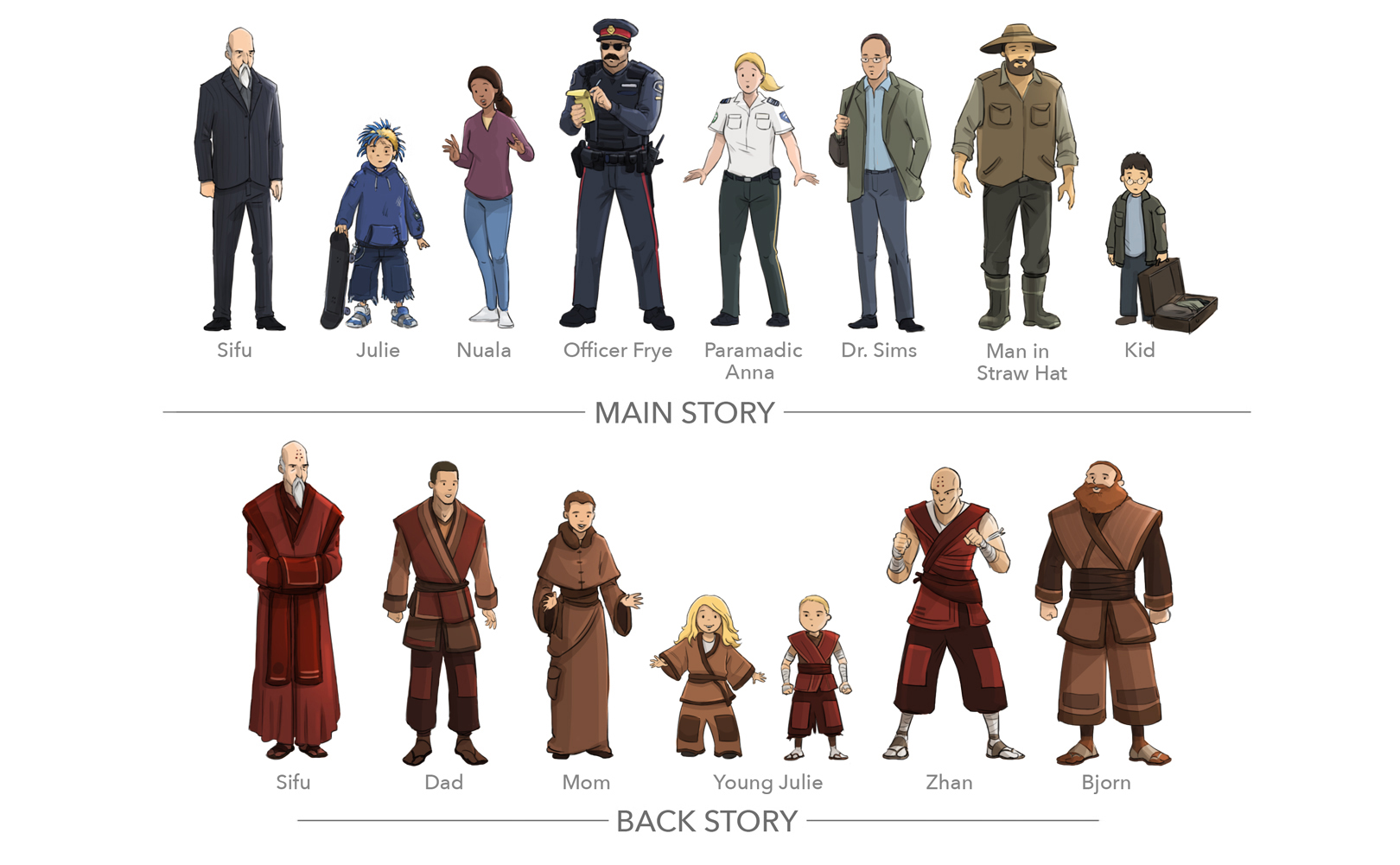 Julie is a hardcore street punk who has found comradery with other damaged inner-city street kids. She does not go to school, is absolutely filthy, and refuses authority of any kind. But when her apartment is finally raided by the cops, and she is suddenly bombarded by visions of a mystical WHITE LIGHT, she is compelled to follow them across the country with nothing but a walkman, a skateboard, and some stolen cash.

Yet she is only beginning to remember the greater story of it all...

Nuala encountered JULIE as a 5 year old child on a bus heading eastward across Canada. Abandoned, and clearly the victim of some serious recent trauma, Nuala rode the bus together back to her home in the city, and took it upon herself to care for her. Nuala did everything to rehabilitate the damaged child, but Julie did not comply and went sideways, becoming a street kid.

Now, 6 years later, when Julie finally snaps and leaves town, Nuala sets out by car to rescue her once and for all.

Once while on duty, Officer Frye encountered the RED ENERGY while apprehending a suspect. It terrified him, scarring his psyche. 6 years later, rehabilitated and transferred across the country, he encounters Julie and thinks he recognizes her from that memory.

Terrified all over again, he becomes maniacally obsessed with her, a symbol of that which still haunts him.

Paramedic Anna is a rookie paramedic, first year on the job, incredibly naive, full of new-age ideas and lingo, and eager to display her virtue. But when she encounters Julie, her heart bleeds like its never bled before.  Paramedic Anna decides to make it her sole altruistic ambition to bring Julie to safety.

She is the comic relief, among some otherwise dark scenes.

Dr. Sims was an obsessive seeker of the paranormal as a youth, but after finding no conclusive evidence he gave up his passion and instead became a medical doctor and psychologist. Now he views reality through strictly scientific eyes, and tries to convince Julie of  textbook psychological reasons for her experiences.

But when he witnesses the Red Energy and White Light with his own eyes, his suppressed true passion comes flooding back.

Man In Straw Hat is a fellow passenger on Julie’s bus who appears to have a fondness for her. He offers his help, but Julie declines. Only later, when Julie is in more dire straits, another encounter with him proves valuable.

Julie does not learn until later that he is in fact SIFU’S NEW APPRENTICE, sent to watch and protect her on her journey back to the Commune.

Kid is the youngest of Julie’s street gang, at only 8. He is weak, and sickly. He has a great fondness for Julie, and when he sees the WHITE LIGHT around her in the night, it brings him great joy. However when the cops bust up their apartment the next morning, he is devastated.

Aside from his dreams and some drawings in his sketchbook, he has almost entirely forgotten that he is actually MASATO, a Fox-Spirit, and that he does not yet belong in Julie’s world.

Sifu’s parents were killed while on a field research study in China when he was only 5 years old. He was rescued by a mystical warrior, who transmitted a powerful RED ENERGY style of martial arts to him. Before his MASTER died, Sifu promised that he would also find a worthy student to carry the Red Energy before his own passing. Convinced that YOUNG JULIE is the apprentice he is looking for, he is heartbroken when Young Julie ultimately escapes his secret Commune training location and vanishes.

When Sifu sees her again in a city 6 years later from the window of his limousine, he is overwhelmed that their paths have crossed again.

Sifu’s parents were killed while on a research study in China when he was only 5 years old.  He was rescued by a mystical warrior, who transmitted a powerful RED ENERGY style of martial arts to him. Before his MASTER died, Sifu promised that he would also find a student able to fully transmit the Red Energy before his passing. Sifu thus has been scouring the earth looking for a candidate, and has created a secret forest commune on a secluded island on the west coast of Canada in which to train those with the highest potential.

When JULIE is unexpectedly born within his commune’s walls, Sifu becomes convinced that she is the apprentice he has been looking for.

Dad was born on a First Nations reservation on the west coast of Canada in the 1960’s. SIFU immediately recognized him as having potential to learn the Red Energy, and rescued him just before the reservation was preyed upon by aristocratic elites. But he refused to go with Sifu unless he also agreed to rescue a young girl he saw, already property of those elites. Sifu agreed. Dad became Sifu’s top student at the Commune, and the boy and girl fell in love.

It was only later when their child JULIE was 5 years old that Dad began to remember the WHITE LIGHT, and the truth of their previous lives.

Mom was rescued as a child by SIFU along with DAD, and went to live at Sifu’s secret Commune to train his RED ENERGY style of martial arts. Mom was not an adept student, but was good at making pottery for the commune with the clay by the river. Romance bloomed with Dad, Sifu’s top fighter. Their love led to their child JULIE, born within the commune walls.

Mom does not recall any past lives, but when Dad re-discovers the WHITE LIGHT, she suddenly knows that her family needs desperately to escape Sifu’s clutches.

Young Julie was the first and only to be born inside Sifu’s Commune. At first Sifu does not see her potential, but one night when Young Julie becomes unusually enraged, he sees that she is in fact the strongest carrier of the RED ENERGY that he has ever seen. When DAD is killed, and MOM falls ill, Sifu takes it upon himself to train her as his most important student. He shaves her hair and transforms her into a RED ENERGY fighter in just a few short months. Young Julie however is not happy with it, and when Mom recovers she chooses to follow her instead, causing a mutiny.

Young Julie remembers nothing of any previous lives.

As a child, Zhan was orphaned as a result of a massacre of a Buddhist monastery. As an infant, he encountered SIFU, but it was not until his teens that they would meet again, and Sifu would accept him as a student. Zhan helped Sifu create his hidden COMMUNE, and vowed his loyalty to Sifu’s teachings.

When Zhan witnesses the WHITE LIGHT however in Julie and her parents, he becomes conflicted.

Bjorn witnessed the daring rescue of several children by SIFU from a fire near his humble Nordic village. Years later he would encounter Sifu again, and grateful to Sifu for his heroics, he vowed to be his student and follow him. Sifu was reluctant, but Bjorn insisted. Being cheerful company and freakishly strong, Sifu accepted his pledge even though he did not show great RED ENERGY prowess.

With time however, Bjorn is willing to betray his oath to Sifu to protect Mom and JULIE.